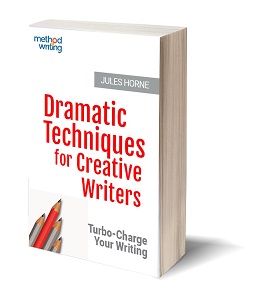 ALLi, the Alliance of Independent Authors, recently published a post on dramatic techniques by Jules Horne, author of Dramatic Techniques for Creative Writers.

With a background in scriptwriting, Jules is perfect for explaining how the dramatic techniques used in theaters and movies can power up your writing and make your storytelling bolder, more engaging, and more compelling. After all, these techniques have been test-driven for centuries in front of unforgiving live audiences, and they work!

Here are five ways you can use them to transform your fiction writing.

Using dramatic actions will bring greater clarity, momentum, and tension to your scenes. It will stop your characters from wandering aimlessly, by clarifying a clear, driving throughline for each moment.

You’re probably familiar with wants at the story level, but they also operate at scene and dialogue level. Think of impulses and momentary mini-objectives that make up the dynamic fabric of character interaction. In the theater, actors break down scenes and identify the underlying dramatic actions, typically expressed as transitive verbs: stop, persuade, tame, uplift, etc. You can do the same to improve your fiction writing.

Identify the dramatic action of your scene. It might be something like “Greta asks her boss for a new job” or “Fred moves out of the flat.”

Now, raise the stakes by establishing a clear underlying motivation. Something powerful and urgent – say, Greta’s desperate to pay a hospital bill, or Fred is moving in with a new lover.

Next, identify the opposite energy embodied in another character. This needs to be something equally powerful and urgent – Greta’s boss wants to fire her, Fred’s girlfriend wants him to stay.

What tactics might each character use to achieve their clashing goals? Brainstorm. Then, organize the tactics to escalate in intensity. Try writing a scene using this backbone. 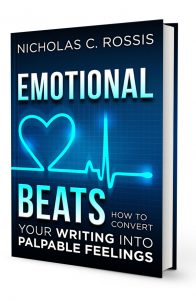 Read for free with KU

As you know, I’m a big fan of using beats in fiction writing and have even written a book on them. Jules here uses a complementary approach to mine, which I found particularly interesting.

Beats can really help with editing and overwriting, as well as structuring dynamic scenes. ‘Beat’ can mean different things, but here I’m simply talking about bits – bits of dialogue, bits of prose – where the impulse changes. The flow of plays or prose can be broken up into chunks these moment-by-moment shifts – say, asks, pleads, rejects, deflects.

If your characters are prone to waffling, identifying beats can help you decide the main impulse of each line, and cut any repetition or fudging. You can also use the concept of beats to edit your prose by chunking it into sections where the impulse shifts.

Use slashes / to break up a section of dialogue or prose where the emotional impulse changes. Identify the dramatic action underlying each beat – plead, demean, deflect etc.

Are the impulses all quite similar – eg explain, reminisce – or is there plenty of variety? If they’re quite similar, and mostly reflective rather than active, chances are your scene lacks tension and drama.

Physicalizing your scenes can help you create clearer pictures for your readers. If the physical essence of a scene is clear to you, it’s easier to bring it to life in the reader’s mind’s eye. Think of your character and setting in simple, bold strokes, as you might see them in a theatre or on a film poster – say, a man in a ship’s hold, or a girl on the open road.

Establishing this core spatial setup early on gives context for your readers, and helps them feel visually ‘moored’ in your story.

Details can wait, as long as they can gain a foothold in your story early on.

Take the spatial setup you’ve chosen, and get up on your feet and act it out. Notice how the space makes you feel and behave. Improvise the scene from each character’s perspective, and note down your discoveries and dialogue. Explore different spatial dimensions – over, below, through, inside. This can help you discover potential character actions and different emotions. It may also help you unblock scenes, by jolting your imagination in unexpected ways.

Bold, powerful images help create vivid pictures for your readers. These engage them more compellingly with your stories.

Think of some of the central images from Shakespeare‘s plays – Juliet’s balcony, Hamlet with the skull, Bottom wearing the donkey’s head. They’re so visually clear and simple that they translate into any culture and language, yet also resonate with great complexity.

Think of films, too – The Piano, for instance, with its bold and intriguing central image. Note that these images are relational – they’re in a context and linked to a character. Does your story have a compelling central image like this?

What’s the central image of your story? If you had to encapsulate it for a film poster or show it on stage, what would we see?

Choose something bold, simple and compelling. Can it stand as a clear emblem for your story? Can you heighten it, or make it more distinctively yours? Is it easy to “read” for someone in a different cultural context, universal enough to connect emotionally?

The more you can link your story to the physical world and the things and people in it, the easier it is to evoke pictures in readers’ minds.

Transformation is a powerful concept for creating a story or scene arc. At its simplest, think of “from… to…” – what changes? This will give you a basic dynamic structure.

Writers are used to thinking about character transformation, but what about places, props, and costumes? In plays, every prop on stage has to earn its keep, and often undergoes transformation in some way – whether broken, used unconventionally, imbued with power, and so on. The same is true for costumes, which often change state as part of the story.

Use “from… to…” for the characters and things in your scene to help you think boldly about change and momentum.

Taking a key image in your story (maybe from 4 above?), brainstorm ways that it might transform or be transformed. What happens if the object or scene is disrupted, destroyed, transferred? Do any of these transformations suggest the core of a new scene? Which character makes the transformation happen, and why? Try to connect the transformation to transitive verbs, giving your characters agency.

For a manual of high-impact dramatic techniques to use in fiction and storytelling, see Dramatic Techniques for Creative Writers by Jules Horne, Book 2 in the Method Writing series.

16 thoughts on “5 Dramatic Techniques to Transform Your Writing”