Of all the parts I’ve played in the theater of life, being a dad is the most meaningful to me. Which is why I so enjoyed learning about Tom’s Bad Dad Jokes. As the Washington Post reports, Tom and Ann Schruben have started posting “Bad Dad Jokes” on a sign outside their Maryland home. The sign has become a neighborhood destination in recent months. 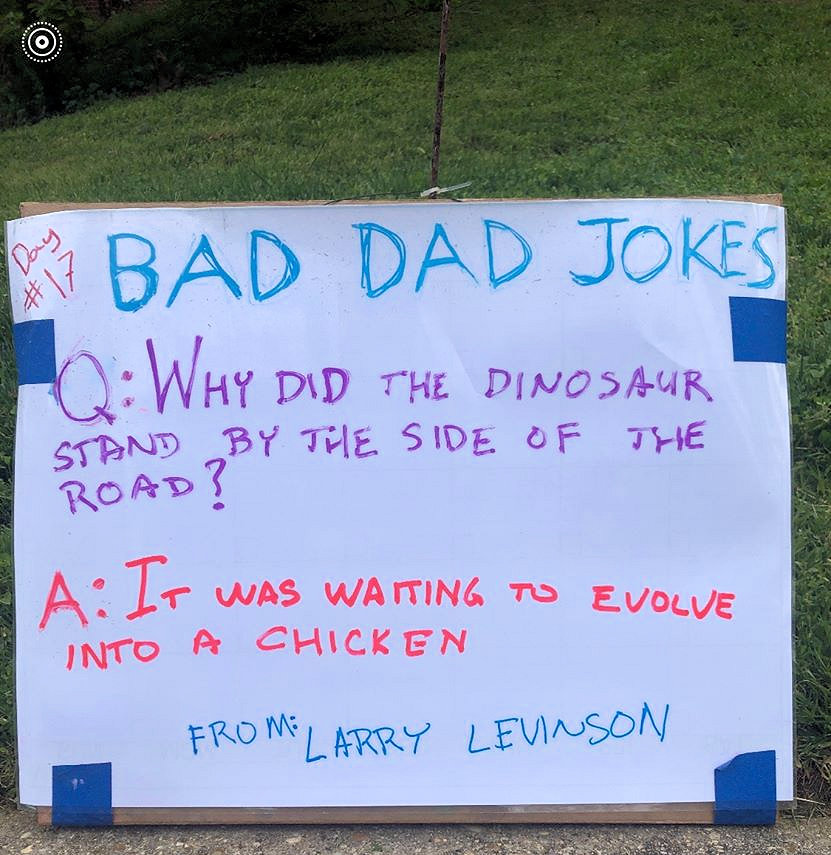 The jokes Tom scribbles each morning are supposed to be bad — and they are — but people love them anyway, which is why there is a steady stream of people ambling or driving by the family’s Kensington home on any given day.

A rabbit, a priest, and a minister walk into a bar. The bartender looks at them and says, “Is this a typo?”

Tom started posting the jokes soon after the coronavirus stay-at-home orders came about as a way to jump-start his mood, which was getting a little grumpy as a self-employed worker in the environmental field. It was the suggestion of his wife, who pointed out that he loves all things corny.

Whenever I try to eat healthily, a chocolate bar looks at me and Snickers.

Tom’s jokes — which he often selects with daughter Darcy, 11 — soon became a hit.

If two vegans get into an argument, is it still considered a beef?

Like generations of dads before him, Tom has wholeheartedly embraced the bad dad joke.

What do you call a fish with no eyes? A fsh.

“Why dads?” he asks, then readily answers. “There’s always been a tradition of dads embarrassing their children.”

Where do you take someone who’s had a peek-a-boo accident? To the I.C.U.

And if, like me, you love dad jokes, check out Tom’s Bad Dad Jokes for a whole load of them!