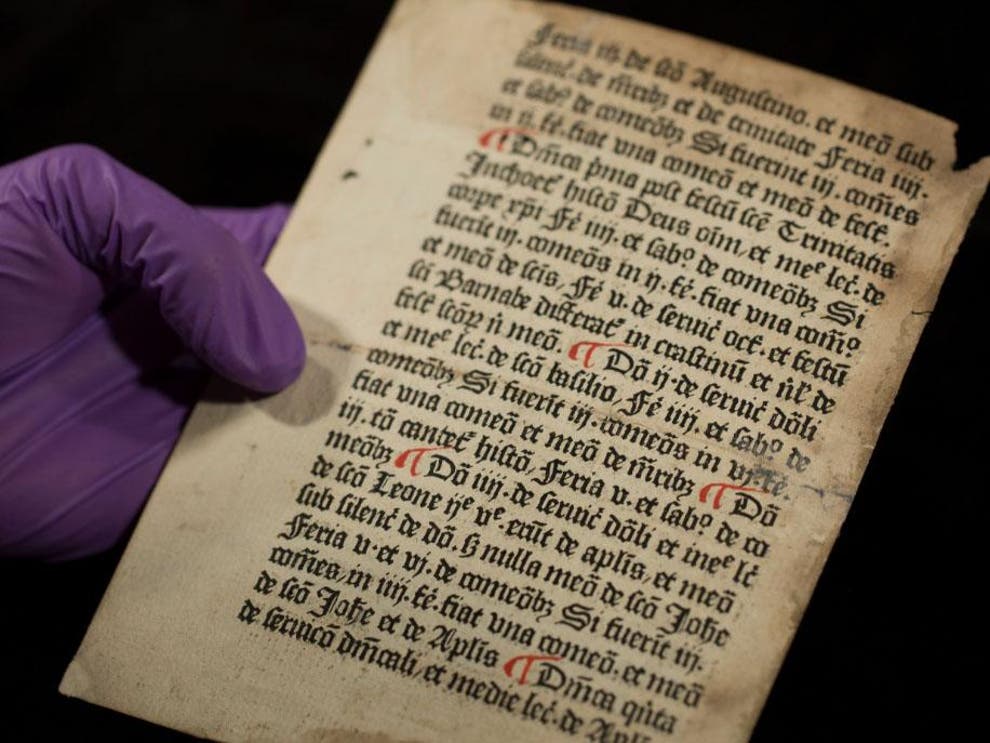 The pages were instantly recognizable due to black typeface and hand-painted red paragraph marks. Image: University of Reading/The Independent

Pages from one of the first books ever printed in England were recently found by librarians at the University of Reading. The pages, which were hidden away for decades in the pages of a different text, were meant to tell priests how to plan feasts.

According to Atlas Obscura and The Independent, the librarians found two pages from a priest’s handbook called Sarum Ordinal or Sarum Pye, which had been pasted inside of another book to reinforce its spine. A librarian working to restore that book noticed and pulled out the pages from the priest’s handbook; they date to between 1476 and 1477.

The librarian said she instantly noticed the “trademark blackletter typeface,” the layout, and red paragraph marks, which were typically added by hand after printing and which indicated the pages were an example of very early printing in Western Europe.

Written in medieval Latin, the pages are from a book that explains to priests how to organize religious feast days for English saints. Hundreds of years ago, printing was a costly and laborious process. First, cloth was dissolved in water. The mixture was dried in thin sheets on which to write and the pads used to ink the type were soaked in urine.

The whole book that contained the two pages was originally around 160 pages long and was produced in Westminster before the Reformation. Its roots are in the 11th century when the text was made into a manuscript for the Bishop of Salisbury.

Only one other surviving fragment of the book exists at the British Library in London, which holds eight double-sided pages of the document.

The University unknowingly obtained the pages when it purchased a collection for £70,000 in 1997 from late typographer John Lewis, and the valuable items sat undiscovered for two decades.

The two pages alone are now valued at around £100,000, as they are incredibly rare finds. According to the Incunabula Short Title Catalogue, there are 79 surviving examples of texts printed in England in 1476 and 1477 from 18 different works. One of them is the newly-discovered Caxton pages at the University of Reading.

If you’re in town, you can see them for yourself: they are currently on public display at the library’s special collections department, where they will remain until 30 May.

18 thoughts on “Found: One of the First Books Ever Printed in England”