Any of you writing fantasy will appreciate Toni Šušnjar’s post on heraldry, shared on Mythic Scribes.

The History of Heraldry

As Toni explains, distinctive personal insignia on shields had been used to identify warriors in battle since 9th-century BC Phrygia. But this insignia was not heraldry as it was not hereditary (familial).

Heraldry appeared in the mid-12th century and flourished during the 13th and 14th centuries. Formal heraldry in England first appeared in 1127 when Henry I gave a shield to his son-in-law, Geoffrey Plantagenet, Count of Anjou, as a wedding present. However, early shields were simple devices with one or two colors and had no principles of heraldry or any semblance of standardization.

Who Could Bear Arms?

As for the nobility, they remained separated in the fact that neither bourgeoise nor peasants were given the right to wear helmet crests.

By circa 1500, the original purpose of heraldry was becoming obsolete. Thus, insignia began to be more and more complex, assuming naturalistic rather than traditional symbolic forms. This event marked the end of true heraldry, and thereafter the science declined.

While heralds existed as early as the 12th century, they were at first only responsible for extolling deeds of knights at tournaments.

Those involved in the organization of tournaments became heraldry experts, responsible for identifying contestants by their insignia. From this sprung their usefulness to military commanders, as they were expected to follow their lords and identify knights. Thus by the 14th century, heralds became appointed officials and confidants of noble households, wearing livery of their lord – and also often spying on his behalf, as even in the mid-14th century they enjoyed diplomatic immunity.

Imitation being the best form of flattery, designs started getting replicated. By the 14th century, English Kings of Heralds were making surveys in their provinces of existing arms in order to reveal possible duplications.

These disputes necessitated an office that could relieve the sovereign of the task of regulating the bearing of arms. In France, Charles VI created a College of Heralds in Paris in 1407. In England, Henry V prohibited unilateral assumption of arms in 1417 and created a new heraldic officer, the Garter Principal King of Arms of Englishmen, who was responsible for issuing Patents of Arms in England and Wales. A few years later, in 1484, Richard III incorporated the College of Arms.

The College of Arms granted heraldry to:

The basic elements of heraldry are the shield, which carries a symbolical figure, and the helmet. Among members of the Church, the helmet was replaced by the mitre or the cardinal’s hat.

Since the basic shape of the coat of arms is the shield, any shapes included on the shield had to be stylized to fit the available space white being large enough to be recognizable at a distance.

Shields may be colored in one color or divided into fields of different colors. Heraldic signs may utilize only six basic colors – gold (Or), silver (Argent), blue (Azure), red (Gules), black (Sable), and green (Vert). On paper, parchment or cloth, gold and silver are replaced by yellow and white, respectively. Differences in color tone are not allowed; each color has only one variant.

There are around a hundred basic heraldic shapes, among which animals (real and mythological), objects, weapons, heavenly bodies, plants (real or stylized), religious symbols, and geometrical shapes (circle, square, plank…). Coats of arms could change as sons added modifications. Pavao Šubić had a shield with a stylized black wing on a red background. His sons had two wings, and when Šubići got the town of Zrin, they added a symbol of a city with three towers. Other than possession of a city, various titles or victories in a tourney or a battle could also be recorded on a coat of arms.

Heraldic devices were highly influenced by their times and the shape of shield and helmet can reveal the time of origin of a device.

Kite shield remained in usage throughout the 12th century, but soon the curved top was replaced by a flat one. Infantry continued to use this new form until the 15th century. As the shield was curved, much of it was out of sight, which influenced the design of arms. In the early 13th century, the kite shield was shortened into what is today called a heater shield.

As plate armor advanced, shields began to diminish in size. Between 1360 and 1400, period shields were gradually abandoned by mounted men-at-arms, and by the 15th century, they were only used in parades and tournaments.

The face of the shield, on which the arms are painted, is known as the Field or Ground. A shield has:

These are from the viewpoint behind the shield, so to a person looking at the shield, the sinister side is on right. Fields near the rim of the shield are thus called dexter chief, middle chief, sinister chief, dexter base, middle base, and sinister base.

In later times, the shield was surrounded by additional elements: 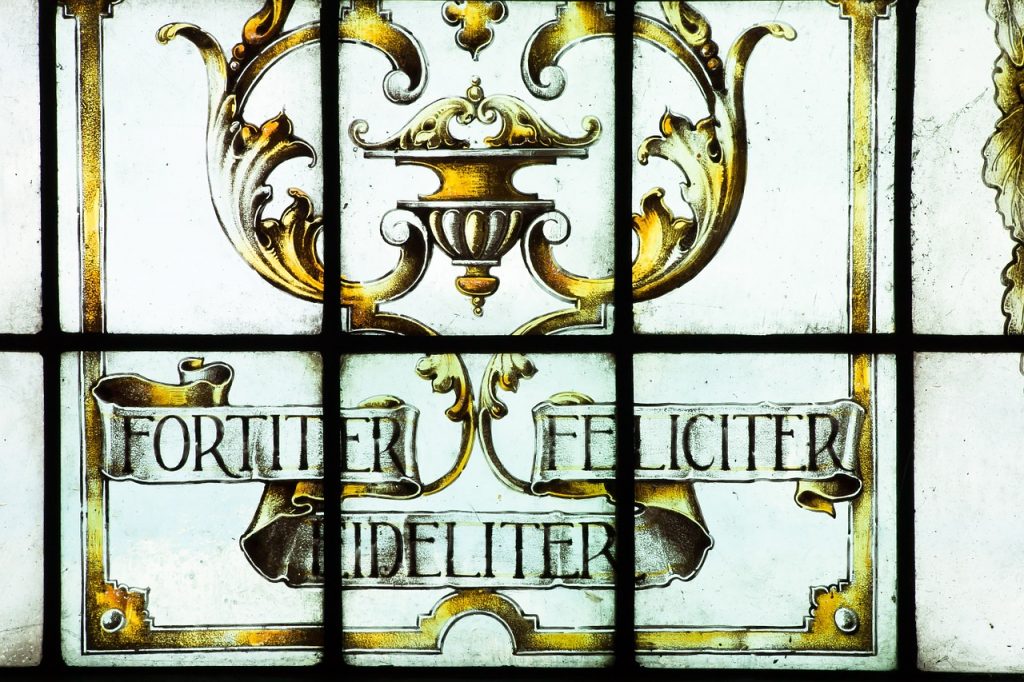 Coat of Arms with motto

Charges are devices based upon the shields. Because of the limited options allowed by the above rules and purely geometric symbols, the need appeared to introduce more graphical symbols. Anything seen or imagined could be represented: animal, birds, fish, reptiles, insects, monsters, divine and human beings, plants, trees, flowers, celestial objects, buildings, etc.

Graphical charges often played puns on the bearer’s name. The most popular charge was the image of a rampant lion, followed by a lion passant. Less popular was the eagle. Inanimate charges were mostly everyday objects: staves, water buckets, arrows, axes, horseshoes, spurs, hammers, flowers, stars, and crescents. Only after 1500 did the human body, monsters, and fabulous beasts, birds, and reptiles become common.

Heraldry always played a part in propaganda. This can also be seen from choices of animals: the only non-European animal that had played a large part in early heraldry was the lion, symbolizing strength and courage.  Other animals were a stag, elephant, spotted ermine, fish, unicorn, tiger, crocodile, bear. Also frequent were monsters – dragon, wyvern, griffin (gryphon).

With shields being relatively small, heraldic devices had to be displayed on something visible from afar. These included banners, standards, pennons, guidons, gonfanons, etc. Standards are narrow, tapering, often swallow-tailed. They range in length from four yards for a knight to nine yards for the Sovereign. Divided lengthwise into two tinctures, they display the owner’s badge, heraldic devices, and motto.

Banners are square or vertically oblong and borne by barons, knights bannerets, princes, and the sovereign.

The Knight Banneret was created by a sovereign for an act of extreme gallantry. In a ceremony, points of a pennon were torn off, thus making it a small banner or a banneret.

The Pennon is a smaller yet version of a banner, narrow, tapering, and often swallow-tailed or fringed. Borne by a knight immediately below the point of the lance, it was arranged to be viewed correctly when the lance was horizontal.

Badges were not hereditary. Instead, they displayed the allegiance of an individual to another individual, likely to a feudal lord. The badge would also be displayed on personal standards, the shields of a lord’s knights, and the livery of his horses.

Cadency happened because a father’s sons continued using their father’s own coat of arms. Thus heraldry demanded distinction from the father’s coat of arms, as well as between coats of arms of each son.

For this purpose, small marks were added in the chief of the shield. The eldest son discards his cadency mark upon the father’s death as he becomes the new head of the family. But since other sons kept their cadency marks, their sons would add cadency marks to already existing cadency marks – and so, potentially, ad infinitum.

If you wish to find out more about heraldry (yes, this is just a summary), you can read the rest of the post on Mythic Scribes!