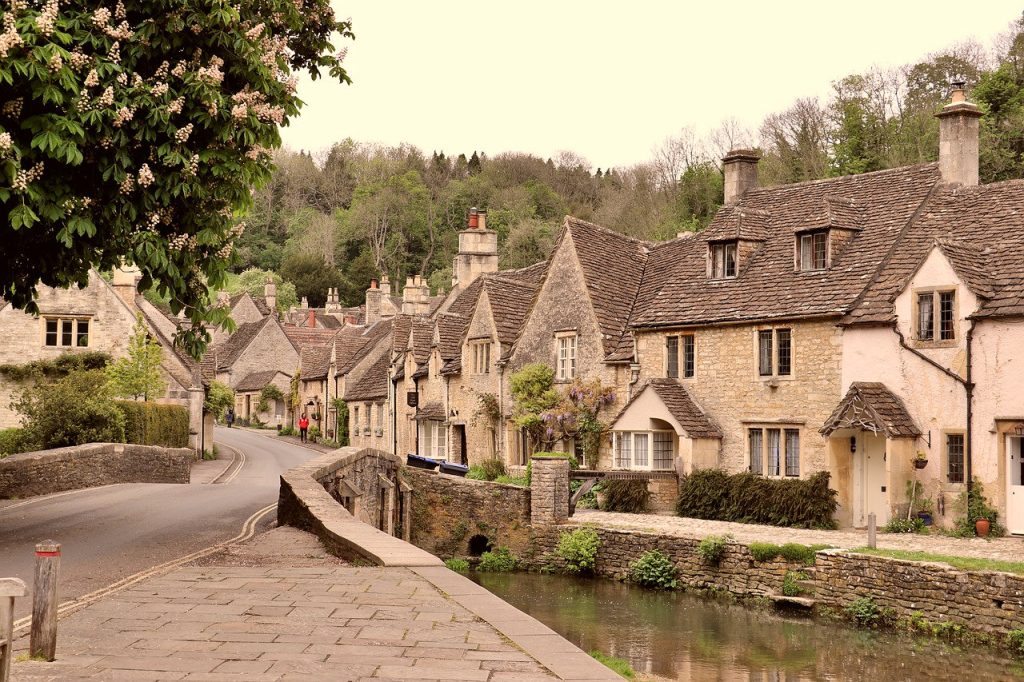 We’ve been watching a lot of Midsomer Murders and the likes with Electra over the years. From which we have concluded that few places are as dangerous as quaint English villages. Now, a hilarious article by Maureen Johnson on Crime Reads, explains just how dangerous they really are – and what you can do to avoid meeting a grisly death.

If you enjoy it as much as I did, you may want to check out its writer, Maureen Johnson. Maureen is the author of the Truly Devious mystery series, which culminates with The Hand on the Wall (Katherine Tegen Books/HarperCollins; January 21, 2020). Visit her online, on Twitter, Instagram, and Facebook.

Stay away from the village fete, do you understand?

It’s happened. You’ve finally taken that dream trip to England. You have seen Big Ben, Buckingham Palace, and Hyde Park. You rode in a London cab and walked all over the Tower of London. Now you’ve decided to leave the hustle and bustle of the city and stretch your legs in the verdant countryside of these green and pleasant lands. You’ve seen all the shows. You know what to expect. You’ll drink a pint in the sunny courtyard of a local pub. You’ll wander down charming alleyways between stone cottages. Residents will tip their flat caps at you as they bicycle along cobblestone streets. It will be idyllic.

Unless you end up in an English Murder Village.

It’s easy enough to do. You may not know you are in a Murder Village, as they look like all other villages. So when you visit Womble Hollow or Shrimpling or Pickles-in-the-Woods or Nasty Bottom or Wombat-on-Sea or wherever you are going, you must have a plan. Below is a list of sensible precautions you can take on any trip to an English village.

The village fête is a fair, a celebration on the village green. They toss coconuts, judge cakes, drink tea, and whack toy rats with mallets. It’s a nice way to spend a summer’s day and thin out the local population, because where there is a fête, there is murder. If you enter a town while the fête is happening, you are already dead. The tea urn is filled with poison. The sponge cakes are full of glass. There’s an axe in the fortune-telling tent. The coconuts are bombs. It’s like the Hunger Games, but dangerous.

Anywhere with a vat

In English villages, vats only exist for drowning people—in beer, in pickling brine, in whiskey, in jam. This is doubly true if the vat was built by 14th-century monks. If anyone offers to show you a vat, say you need to get something from your car, then start the engine and run them over. The police understand this sort of thing. Tell them about the vat.

Places with gargoyles or statuary

Ghosts and monsters of stone. They are there to kill you.

The vicar will find your body if you venture here.

How do you prefer to go: pitchforked, or stomped to death by a two-thousand-pound animal? Spoiler: it will be both.

They have snakes in them.

Join the ghosts up there, why don’t you?

Stay low. They can’t throw you off the balcony if you never go up the stairs.

They are the xylophones of death.

Marble busts fall down, not up.

They don’t even have to dig a hole to put you in.

You’re better than this.

Full of the skeletons of Victorian children and, if you are unwise, you.

Just remove water as a category.

See previous note about the village church. When you see the vicar, run. If you are not dead yet, the vicar is obliged to kill you.

The newest resident in town

They don’t know the Old Ways yet and refuse to learn. They want to open up a Coolspa in that twee Grade Two-listed thatched cottage. They’re talking to you because no one else will talk to them. They’ll be a popsicle soon enough. Shun.

Anyone who leaves a voice mail

Do not leave voice mails if you are in a murder mystery town. It means you Know Something. Don’t leave them. Don’t hang around people who do.

Anyone who looks out windows and sees things

The doctor has been up in everyone’s business and must die, along with anyone foolish enough to pay them a visit. You don’t need a doctor. You have the internet.

They’ve just been looking through some old papers and found something very interesting. They’re just going to answer that knock on the door before telling the rest of the town what they found. If the historian tries to show you something, you punch them right in their dumb research-loving face and flee.

Things are not great at the manor house. They’ve had to sell the lesser Turners and the staff is down to seven. They just found out what a microwave is and they are not happy about it. The poor aristocrat has just enough money to be a target and plenty of entitled rage. They are either the target of the falling bust or the one who plans on pushing it. Eat the rich.

Their roses are perfect because of all the people under them.

They like to go out alone at night to a remote location with a big looking-tube to look. Draw a circle around every word in that sentence that means “no”.

Birds are related to dinosaurs. Did you know that? And like the dinosaur, the birdwatcher will soon be extinct because looking.

“Why, yes, this carriage is from the 1984 stock and has thirty seats. It used to come in from London, Waterloo Station but when they redid the tracks in 1998, why I’ll show you right here is where they connected the two, this rail right here…oh no there goes my head.”

They quote Shakespeare in public, to children.

Anyone with a lot of bees

Oh, you walk around dressed like a fencing ghost and raise eighty thousand little killing machines? Good to meet you.

The loner with a stick

This person appears in town and wanders around, laughing into a bucket and saying things like, “Aye know what ye did, ye old salty doorknob!” They will be found dead soon enough, possibly covered in bees.

PEOPLE AND PLACES THAT ARE GENERALLY SAFE

No one would defile the pub.

Anyone with a dog

Stick with the dogs. Dogs are angels and protect us from everything and we don’t deserve them.

If you enjoyed this, visit Crime Reads and Maureen’s website!