I have been online since 1985. I was one of the first members of the BBS (Bulletin Board) scene in Greece back when we connected to a server using landline modems. I still remember my thrill when I finally got my hands on a 9600 bps modem and could download pictures as well as texts.

In 1995, I developed my first website. Even then, I had identified a need for regularly updated content. While some pages were meant to be static, there were news and events to share. Web developers usually met this need by introducing a News page and placing there any related items. As the new millennium approached, we started placing some of these on the home page, too.

Out of these News pages came blogging. Nowadays, 25 years after I developed my first website, most of my living comes through freelance writing for company blogs.

I remembered all that as I was reading a great article on Broadband Search. It detailed the complete evolution of blogging, from the very first blogs to the future of blogging. Here is my summary, but I encourage you to check out the post in its entirety as it’s filled with interesting information.

The Evolution of Blogging 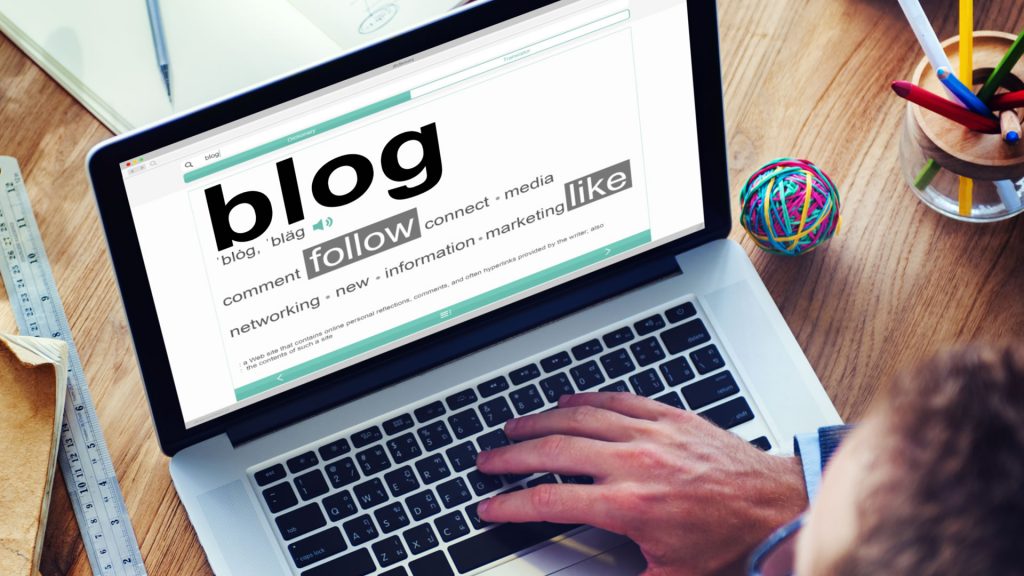 Unlike other examples of evolution (which have taken place over millions of years), the evolution of blogging has taken place in the equivalent of a blink of an eye – the first blog hit screens back in 1994.

The first blog was links.net, founded by Justin Hall in 1994. The blog, as the URL suggests, was a collection of links from around the internet that Hall posted on his site. To make it more informational, Hall included commentary next to each link so that he could talk about why he liked it, why you should check it out, and any other tidbits that made the link more interesting.

His links established a trend in the early years of blogging about what a blog would be – a way for internet users to find links to interesting content.

As blogs emerged before both social media and search engines, for many people, finding interesting stories, alternative news, funny photos, and more meant finding a good blogger who could point you in the direction of the web’s most interesting content.

The word “blog,” so common in today’s language, wasn’t a word until the late 1990s. Credit for coining the term has gone to John Barger, who ran a popular blog called The Robot Wisdom Weblog that he launched in 1997.

His idea was to create a log of all the sites on the web he found interesting, and like all the bloggers before him, offer commentary about the links he posted to generate discussion and get people more engaged.

The term weblog became more mainstream, and as it did, people began to drop the “we” from the front, choosing instead to say just “blog.”

This caught on, and now the English language has a new word.

The popularity of early blogs such as Barger’s showed there was a place in our digital society for the voice of regular people. However, one early challenge in blogging was that you needed to know how to code HTML to be able to post content.

This changed in 1998 as blogging platforms designed to make it super easy for regular people to post content were released to the public.

The first of these platforms was Open Diary. To start a blog on this platform, all you had to do was make an account. Open Diary helped push blogging forward as it allowed members to comment on other people’s posts, helping to create a more interactive blogging experience.

LiveJournal was another important platform that came around at the time, but perhaps the most influential was Blogger, which was launched in 1999. When Google acquired it in 2003, they made it free. This opened up blogging to many more people and helped turn it into a cultural phenomenon.

The Introduction of WordPress

Early on, after the launch of Blogger, most people blogging at the time were using one of these platforms. However, at the same time, a new platform was being developed that would take over the blog world and carry us through to today: WordPress.

Like Blogger, WordPress was launched to help make it easier to start and run a blog. However, WordPress changed things because it’s open-sourced software. This means no one “owns” it. The code is written by developers who simply want to make it easier for people to run a blog. It’s updated frequently by these same “volunteers” and it has always been free.

WordPress has firmly supplanted Blogger nowadays, as the following graph shows (also check out my related posts, How WordPress Powers the Internet and Everything you Need to Know about WordPress): 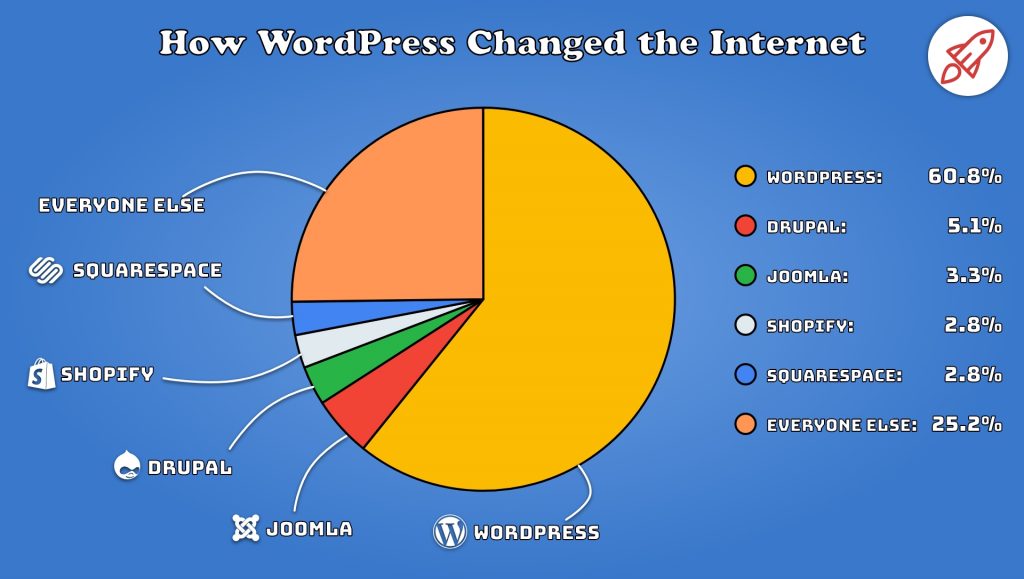 A New Type of Blog

These new platforms, which made it easier for more people to start and run a blog, also helped bring about a change in the substance of blogs from simple lists about links with commentary to long-form, introspective journal entries.

Blogs became a way for regular people to express themselves more deeply and more openly than they had before.

As a result, blogs became far more versatile and trusted. People began turning to blogs for tips and advice, news, information, education, tutorials, and much more.

This diversity helped give rise to more bloggers, who made the blogosphere (the term used to describe the wide world of blogs) include even more writers and readers, helping the community grow even more.

The early days of blogging helped lay the foundation for what we have today. It established the platforms and turned people on to the idea of posting their own content to the web. However, the blogging that goes on today is much different than the first examples of blogging from the 1990s.

While there has never been a minimum word count to consider a blog a blog, it has been the trend from the beginning that a blog is long-form prose.

However, for many people interested in keeping a blog, this made things difficult because our busy schedules often keep us from sitting down to write regularly. Only the most dedicated of individuals managed to carve time out to keep a blog.

Enter microblogging. It is essentially the same thing as blogging in that it allows people to share their thoughts, opinions, ideas, etc. However, it focuses on shorter content.

Some consider Twitter to be the perfect example of microblogging, blurring the line between social media and blogging.

The first known example of a video blog appeared in 2004 when bloggers started posting video content to their sites. However, video blogging really took off in 2005/2006 when YouTube was launched.

This made it super easy for people to upload and share their video blogs. This transformed the blog, and the success of videoblogging helped turn YouTube into one of the most visited websites in the entire world.

Business Blogs and the Blogosphere

Unsurprisingly, the popularity of blogging and social media, in general, has caught the attention of the business world. Many businesses now use a blog as a means of communicating with customers, assisting them with frequent issues they might have with the company’s product or service, and also building a brand.

Blogs are useful to companies because the business who runs it has complete ownership over the content that’s produced. This allows companies to take better control over their image and spread the right messages about their brand.

Blogging and the News

Over the years, blogs have also become more and more trusted, with some of them even turning into full-fledged news organizations. A great example of this is the Huffington Post, which started as a blog and has turned into a nationally recognized news source.

Nowadays, many blogs function as an alternative to the mainstream media, covering stories and issues that often get ignored by the big news outlets. Of course, because anyone who wants to write a blog can do so, immediately assuming what you read on a blog is true is a dangerous game.

Bloggers found out they could make money from their blogs early on in the development of the internet. Dedicated and successful bloggers began earning money by promoting products, selling advertisements, writing books based on blogs, and more. This helped make “blogger” a legitimate profession, and countless individuals have been, and still are, able to earn a living off running a blog.

Existing blogs, or those associated with companies, need people to update them and continue making new content. This has opened up more opportunities for people interested in blogging to make money doing just that.

One of the big draws to working in the blogosphere is that you can do it from anywhere, and you can do it for multiple clients. This allows people more freedom and flexibility than perhaps any other job, and this has proven to be a major draw for people from all over.

This type of work, known as freelancing, is becoming more and more popular, and blogging has played an important role in this trend. Here is a look at the growth of freelancing over the years, and as the world continues to go digital, we can likely expect this to continue. 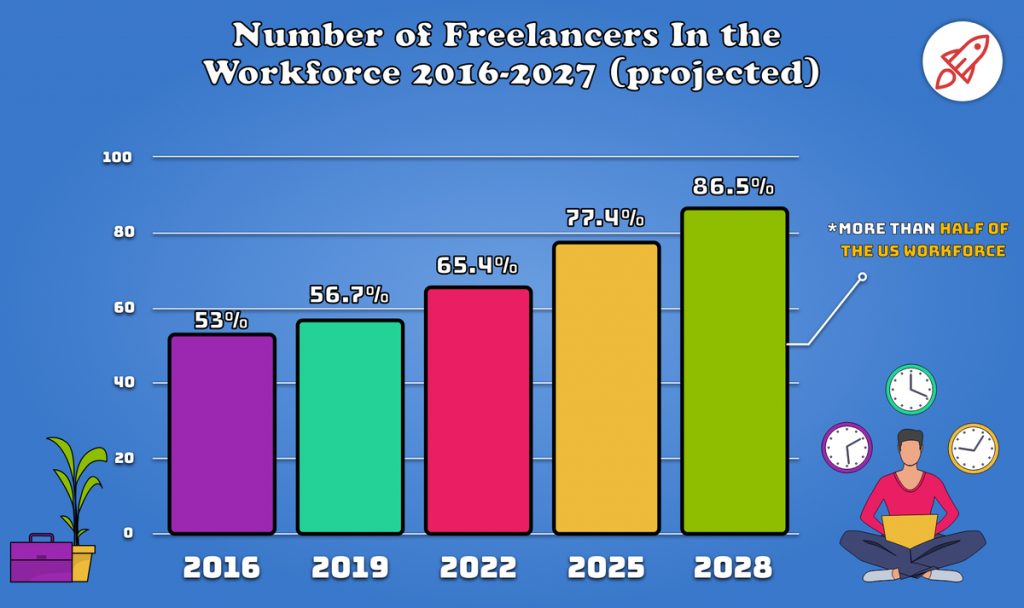 In addition to changing how we communicate and connect, blogging has also helped advance the discussion about freedom of speech.

Blogs allow people to publish whatever they want. They don’t need to wait for someone else to publish their work. Free speech advocates use this as an example of how the internet makes us freer, and it’s why they fight any internet regulations that limit people’s ability to express themselves.

The Future of Blogging

There is no way to tell where the blogosphere will go from here. In just the past 25 years, blogs have gone from being small lists of links with commentaries to full-fledged businesses and so much more.

However, the core function of a blog has remained the same: it’s a platform for people to express themselves.

Since it’s unlikely people will stop wanting to express themselves, we can expect the blog to remain in our lives for the foreseeable future. But considering how much things have changed since the early days of the internet, the sky is the limit for the future of blogging!

69 thoughts on “The Evolution of Blogging”